The Forensic Files: Understanding the Calling 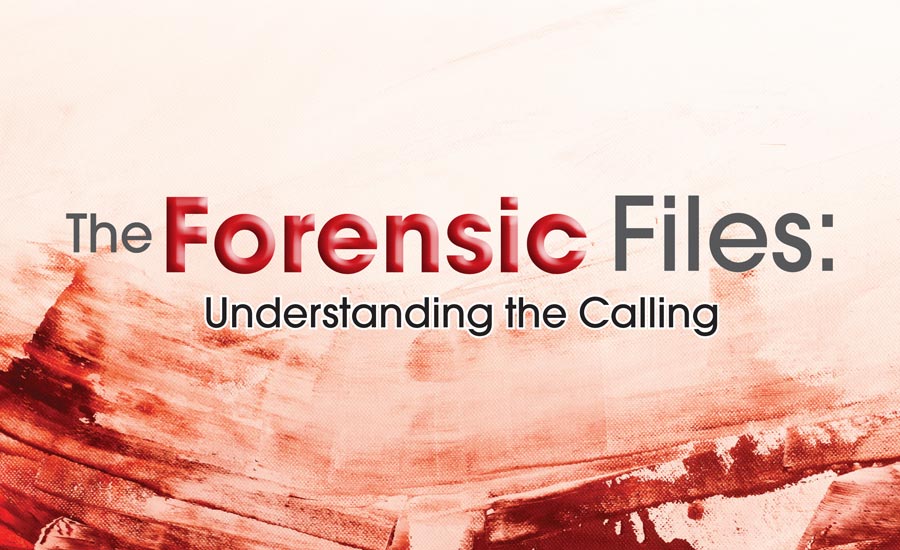 The first homicide in human history is recorded in the Bible. In the fourth chapter of the book of Genesis, it is written that Cain rose against his brother Abel and killed him. Later in the tenth verse, God says, “The voice of your brother’s blood cries out to me from the ground.”

There, right there, (to quote Howard Cosell) is quite possibly the first restoration and remediation project. It certainly predates the first water loss project which is, of course, the flood of Noah’s time, which predates the first fire loss which was Sodom and Gomorrah. We have been cleaning up after trauma, water losses, and fires ever since. Of course, back then, there were no guidelines or standards to provide a roadmap to the restorer to help ensure total microbial decontamination, but as with everything, times have changed

Among tribal people, whether it be the Navajo, the Choctaw, the Comanche, or any of the tribes I have been blessed to spend time with, there is a common core belief that if you don’t know where you came from, you’ll never know where you’re going.

When I first approached about writing this column by Michelle Blevins, I told her that the only way I would consider it was if I were allowed to write in the same manner as though you (the reader) and I were having a conversation along with a good cup of coffee. That being said, I think it’s only fair to give you a disclaimer and warning. The disclaimer: I am not an expert. Never claimed to be, never will. I am simply a half-breed cowboy who has been cleaning and remediating the mishaps and mayhem of the human condition for 45 years. In that amount of time, I have acquired enough field experience to help in the decision-making process.

Allowing my team and I to reach successful remediation results on Forensic Restoration® projects. But make no mistake: I consider myself a student. I will always be a student. Because there will constantly be something new and exciting to learn, always another lesson.

Here’s the warning. Whatever we do in this life, it is always going to be a part of us. From the best day you ever had as a child, maybe it was a birthday or that Christmas when you got what you ask for, to the worst day you ever had. Maybe it was that breakup in high school and you were just sure the world was going to end or maybe the loss of a loved one or family member. The good and the bad, all of these life experiences stay with us and make us unique. Not only the experiences themselves but also the manner in which we perceived and dealt with each one, hence the term “character-defining moment.”

In the world of Forensic Restoration®, every incident site we work on, as operators, will always be a part of us. A level 1 medical incident or a level 2 trauma resulting in LOL (Loss Of Life) will not have the same impact on an operator. As a level 3 unattended death in an unsanitary dwelling resulting in advanced decamp with cross-bio contamination. But each and every forensic incident site we remediate will always be a part of us.

WORK IS PART OF YOU

How you process and departmentalize the information to both the senses and the psyche could be a major factor in the length of your career as a Forensic Operator™ and/or determine if you are even suited to do this type of work at all.

There’s an old saying in boxing, “Many are called, few are chosen.” When I was a young fighter, my boxing coach explained a fighter’s career like this, “A fighter’s head is like a cash register. A cash register will hold only so much money and that’s it. Some cash registers are bigger than others, but both have limits.” The “cash” is punishment taken over a fighter’s career. Some fighters can take an enormous amount of punishment. They are like big cash registers, but once saturation point is reached, that’s it, that’s all. It’s the same in the Forensic Restoration® industry.

Thanks to Hollywood and movies like Pulp Fiction, The Cleaner, and Sunshine Cleaners, there is a morbid curiosity about what we do. That’s okay, it’s human nature. When someone finds out what I do, it’s not uncommon to hear, “You’re a crime scene cleaner?” (I hate that term, and you can rest assured I’ll write why). “I bet you see some things!” Here’s where I steer the conversation and talk about what we really do and that is helping people who are probably having one of the worst days of their lives.

So, while some people will never be suited for this type of work. Others who pursue this will have different lengths of time as an actual field operator before reaching a saturation point. Some operators have a saturation point that is off the charts and may never be reached but makes no mistake, everyone has one.

As I mentioned above, I have been doing this job for more than four decades. If I wanted to, I could sit and remember every forensic incident I have remediated. Since I worked my first “self-cessation” (suicide) with my father when I was 13 years old. But I choose not to. I file those memories away and instead access the good ones. Like the first time, I saw my wife. Beautiful memories are one of the ways I maintain Hozo.

According to traditional Navajo beliefs, for a person to live a long and healthy life. It is essential to living in balance mentally, physically, and spiritually. This concept of balance is called “Hozo.” If a Navajo is out of Hozo, sickness and/or death may occur. Most traditional Navajo Healing Ceremonies such as “The Blessing Way” are ceremonies to restore Hozo, so one may “Walk in Beauty”.

When my phone rings, I never know if it’s going to be a homicide, a self-cessation, unattended death, or an infectious disease call. All I know for sure is that the balance (Hozo) in that client’s life has been disturbed. And that, my friend, is what we really do! We are given a very honorable and even sacred charge, to go and begin the restoration of Hozo for a fellow human being who is truly in need. For me to be able to accomplish this task, it is very important that I am in Hozo. Because I too have a saturation point and I hope I never reach it.

With a warrior’s passion and a servant’s heart, you may be one of the chosen.

How to get started

The template for a successful Forensic Restoration® project

And more history from a half breed cowbo

State of the Cleaning Industry 2017