The 7 Steps of Forensic Cleaning After Unattended Death 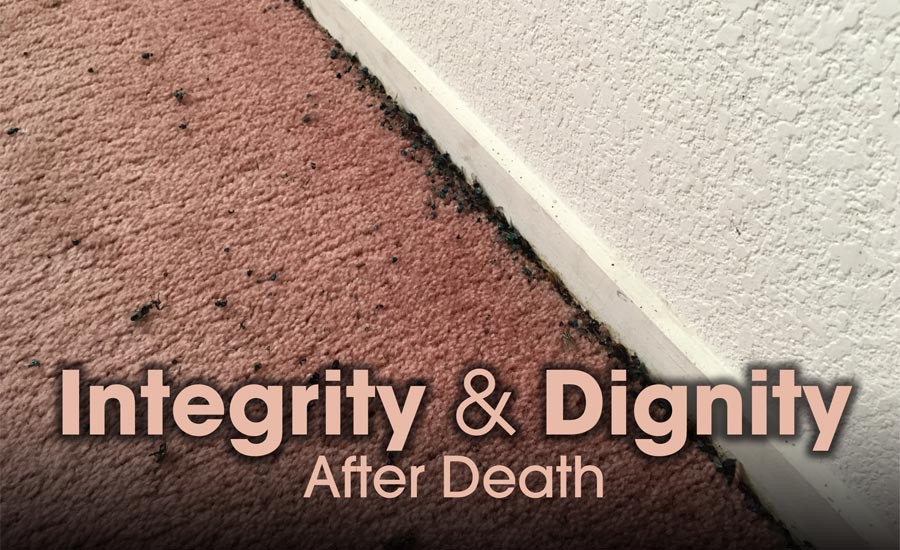 Before we get into the “meat and potatoes” of this article, let me just say that this particular situation was bittersweet. This is a story of love, death, and how devoted a man was to his wife.

Anthony and Mary enjoyed their life to the fullest and loved each other and their family. Their devotion to the Lord was undeniable; their Catholic roots ran deep. They had two children during their time here on earth. Their daughter passed away at the age of 17; their son passed in his 40’s.

Unable to live without each other, when Mary passed in their Las Vegas home in 2017, Anthony could not bring himself to call for help. Instead, Anthony took matters into his own hands, starving himself to death. Anthony died about a month after Mary; their bodies not discovered until more than a week after his passing. I tell you all of this to paint a clear picture of the job’s requirements, and why everything happened the way it did.

We received the call in late September to do the forensic restoration work in this home. Anthony and Mary’s niece was handling the details. Since this type of remediation is covered under the homeowner’s insurance more often than not, we advise families to file a claim. As soon as an adjuster and a claim number are assigned, we take over the claim with the adjuster and relieve the family of this responsibility, and the real work begins.

Our methods to remediate any biohazard situation are simplified into seven steps. Assess, Contain, Reduce, Clean, Disinfect, Test, and Reassess.

Serum indicator, ATP tests, and meter in hand, we arrived at the home and donned all the necessary PPE.

As soon as we entered the home, we could smell the odor from decomposition. The first decomposition area was in the master bedroom. Serum indicator was sprayed on the bed frame and below where the body was found to determine just how far the fluid from the decomposing body had traveled, and the severity of the damage. With this practice, we able to determine the biohazardous waste confined to the mattress only. The fluid had not seeped into the box springs yet, so that tells us this person was only here for a few days.

We continued our assessment in the other bedroom where Mary had passed away on the bed. This time, our serum indicator showed there was not only was the fluid in the bed, but it had sprayed onto the wall, saturated the entire mattress, and the bed frame was coated in lipids, hair, skin, blood, and various other dried and wet fluids. With the indicator, we able to see where the floor under the bed was damaged as well. From experience, at this point, we also assumed the fluids permeated through into the padding and to the concrete foundation. With a thorough knowledge of body decomposition, it was clear this person been there longer than the other from the first bedroom.

We performed four ATP tests in the home for a “before” reading of the cleanliness (or lack of) in the home. From our assessment, we were able to write our remediation plan:

After the assessment, we set up two sets of hydroxyls and air movers as well as the HEPA air scrubbers. We left them in there overnight to help with the dust and the odor. Then began the remediation with the back bedroom, the worst of the two rooms.

We set up our transition and clear zones. The transition zone is where our biohazard barrels, biohazard waste bags, tools, chemicals, and extra PPE staged.

The next morning, we moved the hydroxyl, air mover, and air scrubber setup around in the house for even coverage.

We suited up and sent the first valet in. During this type of remediation, we keep one valet in the affected area and one in the transition zone. This keeps one person “clean” during the reduction stage to retrieve additional tools and chemicals when needed.

The technician used a foamer to apply disinfectant to the bed and the carpet for removal. He then cut the bed apart. Each layer is separated and cut small enough to be disposed of in the barrels. After the bed is removed, the frame is disassembled and set aside to wiped down. The carpet cut out as well as the padding. This is when we saw the concrete foundation in fact aﬀected.

From here, we started in the second room – reassembling the transition zone, and getting the proper tools in place. Remember, in this room, the mattress is the only thing affected.

To get prepared for cleaning, the remainder of the house emptied.

To finish up the cleaning, all the carpet and padding removed in the remainder of the house, and every single square inch of the house wiped down with the enzyme cleaner. Since flies and other insects were present in the home due to the body decomposition, this step was necessary to remove the laden eggs and larvae in the carpet, as well as remove all the fly specs throughout the home.

The entire home then disinfects with a foamer.

We performed four new ATP tests to determine the cleanliness level of the home post-remediation.

After the testing, we were able to prove and document that the remediation was a success and the family could move forward with the repair phase.

We are a biohazard remediation company. That name comes from exactly what we do. We remediate homes and businesses by removing the presence of biohazard. We are proud of what we do and have a passion for this industry.

All Cleaned Up has been helping people since 2012, and this scene was one that will never be forgotten. Not because of the visual aspect, but because of their story. This was one of love and the family was incredibly understanding and stoic.