In Our Own Backyard: Cleaning Schools After the Thomas Fire in Southern California 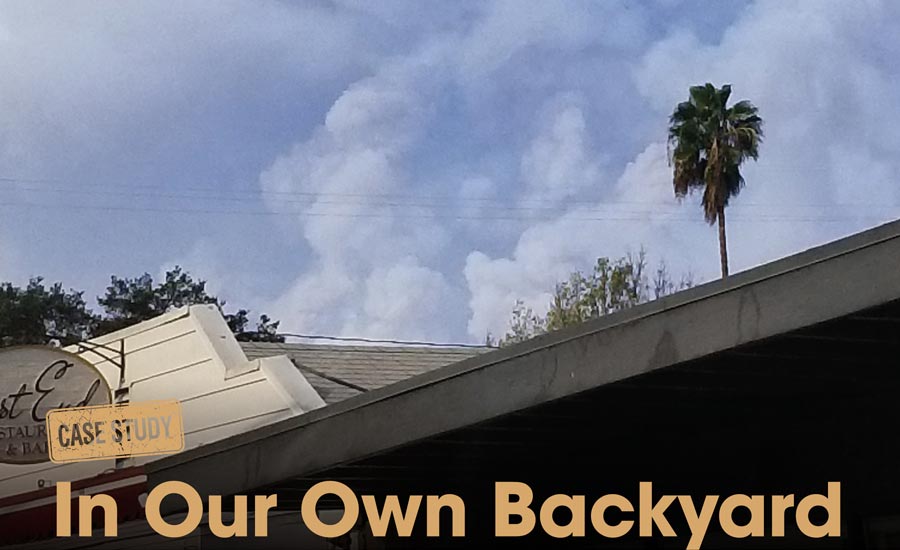 It was another warm and windy night in Southern California. As with any strong East wind event, we anticipated hearing about a small brush fire or two in the morning. So it wasn’t much of a surprise to hear about the one that kicked up about 20 miles away. As restoration contractors, we are always ready for the calls that come in for smoke damage, but nothing could prepare us for this.

The Thomas Fire pushed through our neighboring town of Santa Paula like a freight train, burning at a rate of an acre per second. It was headed directly for the Ventura/Oxnard area we call home. We knew we were going to be extremely busy with calls, but we experienced something else we weren’t anticipating…. a number of employees not able to come to work because they were being evacuated. We called an emergency meeting to review our current response plan and discuss how to supplement it in anticipation of our community calling for help. As the calls came in, we put the plan to work and the “list” began to grow. Then we got a call that changed everything.

We had a relationship in place with the Santa Paula School District from several small jobs we had done in the past. We received a call from the maintenance director asking us to take a look at a few schools in the proximity of the fire as they were concerned with smoke odor and soot intrusion. Inspections were done with a third party environmental professional, so a written protocol could be utilized.

From there, one school turned into an entire district – eight schools total. Most of them only required air scrubbers to run for a few days, but three were heavily impacted and needed considerable attention. The environmental professional recommended HEPA vacuuming. And wet wiping of all contents and surfaces, carpet cleaning, air scrubbers, HVAC cleaning, and deodorization. They also wanted the exterior of the structures and play areas pressure washed. The district was in agreement and the maintenance director said the words we all love to hear, “I need you to start today.”

These schools consisted of 25-30 classrooms, a library, cafeteria, bathrooms, and offices. They wanted classes to resume in a week. Now bear in mind, my emergency service crew is a very capable group of 12 and while they are great, this was a tall order to say the least. Plus, the residential list of jobs was growing exponentially (over 750 in all). We immediately reached out to other DKI franchises in the area for support and put ads out for help. Trusted sub-contractors were brought in for the HVAC and carpet cleaning and phone calls were made to equipment suppliers. To purchase over 200 air scrubbers and renting another 150. We also rented 100 Odorox hydroxyl generators. Now we were ready… or so we thought.

Just as we were kicking off this project, the risk assessment group for the Ojai School District called. The fire had continued its destructive march through the area and tore through the valley of Ojai just to the Northwest of Ventura. The Ojai Valley is essentially shaped like a bowl with hills all around the perimeter. Thankfully, the fire burned around the bowl and didn’t get down into the valley but the smoke and ashfall were horrendous.

There were 10 schools impacted which needed immediate attention. Who were we to say no? This was not only a chance to do a ton of quick business. But it also gave us the immeasurable opportunity to do our community a great service. And provide families a clean and safe place for their children when many of them couldn’t even be in their homes. Of course, we silently panicked where nobody could see us but then we put on our capes and rushed to the rescue.

In addition to the “average” schools similar in size to the ones we were cleaning in Santa Paula, Ojai had a high school and a middle school each double the size of the others. There were basketball gyms with 35-foot ceilings, auditoriums with performance stages, and crow’s nests. Ram board and plywood were used to protect the hardwood gym floors and bring in lifts. It was one challenge after another, but we persevered.

We approached each school with a plan in place. The biggest obstacle was time. Due to air quality concerns from the EPA, the schools chose to close for an additional week. This ran right up to Christmas Break, giving a window of three weeks to get everything done. While you may think that sounds like a sigh of relief, it was, but a very small one. This was still a LOT to get done in three weeks’ time.

In addition to the three DKI franchises we called, we hired roughly 50 people within a few days to supplement our workforce and help clean. We set up an operations desk at each location to track labor and material. And broke the labor force up into teams of four and assigned classrooms to each. The plan was to have them spend roughly 60 to 90 minutes in each room and move on. “Mop-up” teams of two or three people follow up and hit details that were missed. This typically took another hour. Our thought process was if we sent a team into a room and told them to make it perfect. It could take four to six hours to complete. This method had two sets of eyes on each room and we were able to get through rooms in an average of two hours.

After a while, this improved even more. The ultimate goal was to get the rooms soot/ash-free and eliminate the odor. Air scrubbers ran during the cleaning and HVAC cleaning took place simultaneously. Now we had to deal with the smoke odor in the air and porous materials. Obviously, hydroxyls were the first thought and we certainly put them to use. However, as many of you know, these typically need to run for three to five days in order to truly have an effect. Also, I know there is an argument out there about whether or not they are safe to run in occupied spaces, but we opt to not do so.

We had an average of four days total per school to get in and out with all tasks completed, so we had to come up with another solution. We had recently made the decision to invest in the SteraMist technology and our timing couldn’t have been better. We knew we could go into a room after it had been cleaned and spend an hour or so treating it with SteraMist. While SteraMist is mostly known for its disinfecting capabilities. It also has been known to have a tremendous effect on smoke odor.

The trick was selling it to the district and the insurance carrier. I considered the arena we were working in and explained the purpose of this new technology would be to tackle the smoke odor, and the additional benefit is a 6-log kill of biohazards. This would cut down on germs, potentially decreasing illnesses with the kiddos. And leave the rooms cleaner than they’ve ever been. SOLD!!

As we worked tediously for three straight weeks including weekends and holidays, the ash continued to rain down and you couldn’t be outside without a mask. Crews would clean and disinfect these rooms but how do we prevent everything from going backward?  We sealed the rooms up and ran hydroxyls. The plan ran very smoothly and the staff members at the schools were thrilled.

Now we are back to residential cleaning and we continually run into homeowners recognizing us from the school work, thanking us for our efforts. We were able to complete 13 schools for $3.7 million of work in three weeks. But most importantly we solidified a very important relationship with the school districts in our community and felt like heroes.