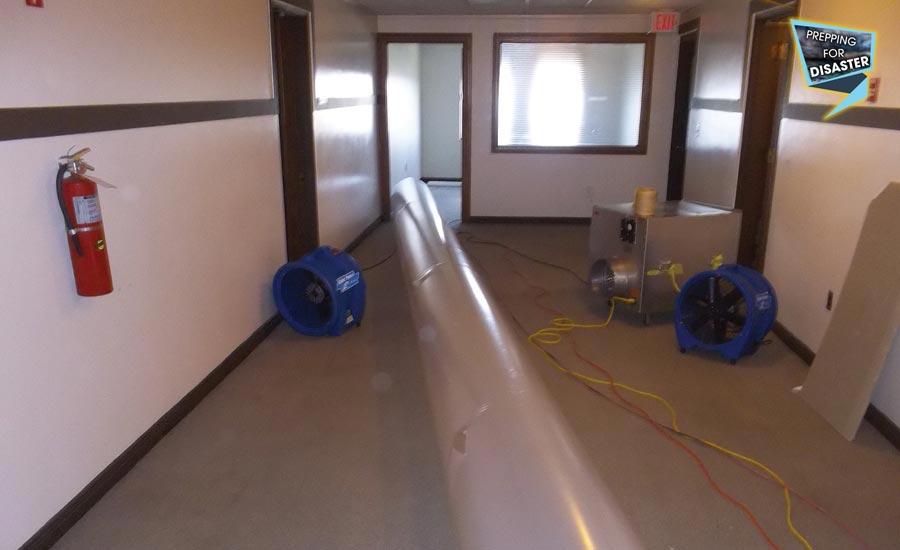 Tens of thousands of documents. Months of work. Hundreds of workers displaced. Dozens of techs put to work. And working daily with local government. It was a restoration job that covers every angle of the industry: water and fire damage, asbestos, contents cleaning of electronics, documents, and furniture, and odor removal.

The 13-story Macomb County Government Building in Mt. Clemens, Mich., suffers an electrical fire in a utility shaft in mid-April of 2013. Built-in the 1930’s. The building go through several renovations over the years and housed a plethora of county government departments. Including the Register of Deeds, human resources, the county sheriff’s department administration offices. the county facility department, the 911 dispatch center, computer mainframes, county-wide phone system, and others.

The fire displaced 150 to 200 county employees, according to the Detroit Free Press, and took about three years to restore, renovate, and reopen for daily use.

Jarvis Property Restoration done work for Macomb County in the past and establishes relationships with county leadership as their emergency service contractor at the time of the fire. Jarvis crews were on scene doing mitigation work for four to five months after the fire before the renovation process starts.

“Our main scope of work started with emergency services and safety concerns in the building,” explained John Ingoglia, Jarvis’ Vice President of Operations and the project manager on this job. “We worked side-by-side with the county staff to coordinate everything. We immediately did the environmental and air quality testing completed. Performed water extraction and water mitigation, installed temporary electrical services to hallways and critical parts of the buildings. And established odor control because there a lot of soot and smoke throughout the building.”

The building was without power from the start, meaning large generators had to be brought in to power all the equipment. The first few days of this job meant having a crew of about 20 people working. That quickly accelerated to 70 or more on-site within just a few days.

The county didn’t allow Jarvis to gut the entire building. And the company was also unaware in the early stages of the mitigation that the county would soon decide to do full renovations anyway. So, crews tediously removed the porous materials on all 13 floors of the building – like cardboard, ceiling tiles, carpet, and other similar materials. At the same time, ozone chambers, hydroxyl machines, and air scrubbers set up to tackle odors quickly.

Three or four floors also partially flooded from the initial fire suppression. So water extraction was also a big part of the initial emergency mitigation.

It should also note that the elevator didn’t work for the first three days. So those first 72 hours of work intense and exhausting.

Once the initial critical needs were address, the Jarvis team sat down with the county to establish priorities. That started with document and electronics recovery, and security.

Ingoglia says Jarvis cleaned more than 900 electronic devices and literally tens of thousands of pieces of paperwork. Documents handled depending on the amount of damage, critical nature of the document, and other criteria. Some were freeze-dried, others were hand-wiped. And some had to just be reproduced. Every single piece put in an ozone room to remove any odors. Crews also had to perform asbestos abatement in the elevator shaft where the fire started.

There some initial minor snags during this process as Jarvis tried to help multiple county departments. That each thought their needs should be a top priority. This is where this job differed greatly from restoring a manufacturing facility after a fire, for example. At a manufacturing facility, you likely have one or two points of contact. On this county job, in a 13 story building, there multiple department heads who work autonomously from one another and were all eager to get back to work.

Fortunately, county leadership had this handled, too.

“The best thing the county did, right off the bat, declares a state of emergency on the county building. ” Explained Matt Jarvis, the company’s vice president. “That allows everything to stay at the executive level with the county, and those at that level highly organize and results-driven.”

That high level of organization partly made possible thanks to daily meetings between county leaders, Ingoglia, Jarvis, and other key players in the restoration process. This is when a mitigation plan put together.

“Every day, we had meetings at the county executive’s office. Communication was critical. We had really high priority areas where things got put on rush status to get them back to the county as soon as possible,” Jarvis said.

During the conversation with R&R about this job, the importance of communication between Jarvis and the county was stressed time and time again.

“The biggest thing we learned and reconfirmed was the importance of communication with all parties. Macomb County highly populated, and this building was the heartbeat of the county for the systems it housed inside,” Jarvis said. “We couldn’t make any mistakes because of the importance of the systems in that building. The organization was key. If we hadn’t known the county’s needs. we probably would have handled this a lot differently.”