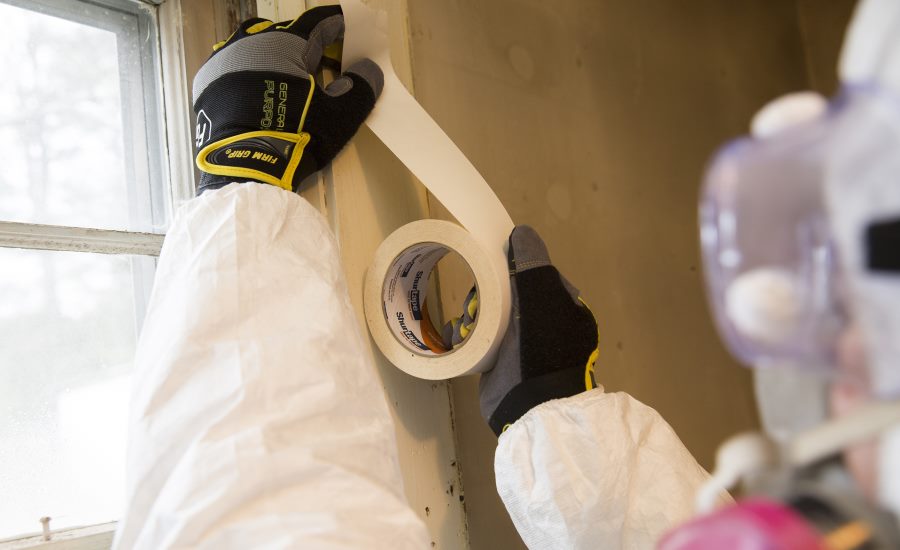 The containment building is a critical part of many restorations, remediation, and abatement jobs. These barriers, often made with poly-sheeting held in place by tape, are used for a range of jobs – from the abatement of mold, lead, and asbestos, to clean-up of damage caused by fire, smoke, or water, to keeping contaminants and even crime scenes contained. Containment systems are also useful in general remodeling projects, particularly where stone or woodcutting occurs when particles such as silica dust or sawdust are released into the air. In these situations, having the proper tape(s) is essential to building a high-performance containment system.

WHY BUILD A CONTAINMENT

Building an airtight containment is paramount to protecting interiors during restoration projects and minimizing the risk of contact with hazardous materials during abatement. Containments serve to:

HOW TO BUILD A CONTAINMENT

Tape – either applied in a two-step or one-step approach – is often used to build containment systems. The traditional two-step method involves the use of two different types: a blue painter’s tape and a heavy-duty or poly-hanging duct tape. To build a containment using this method, a blue painter’s tape. Ideally one with clean removal of 14 days or longer, is applied to surfaces to which poly-sheeting will be hung. Then a heavy-duty or poly-hanging duct tape is used to secure the poly-sheeting to the backing of the painter’s tape.

In this situation, the painter’s tape serves as a barrier to protect surfaces from damage that could otherwise be caused by the direct application of duct tape to the surface. Surface protection is particularly critical in restoration or remodeling jobs in which the structure will remain intact once the job is complete.

This method also eliminates the need to use a spray adhesive, which can be messy.

The two-step, two tape method has been used and relied on by professionals for decades, but advances in tape offerings have also led to the option of a one-step method of the containment building.

The one-step method eliminates the need for two tapes in favor of simplifying and using a single, double-sided tape to hang poly-sheeting.

Double-sided containment tapes combine the properties of the two types of tapes used in the traditional two-step method. One tape, one-step solution delivers several benefits to users, including:

Whether you prefer the Two-Step Method or the One-Step Method of building containment systems for restoration and abatement applications. Using the right tapes is key to achieving airtight, high-performing barriers. Shurtape offers a full line of tapes to get the job done.

For the Two-Step Method, try:

· Shurtape CP 327: Specifically formulated blue containment masking tape that replaces the traditional blue painter’s tape in the containment building process. This tape is made with an aggressive adhesive that allows it to stay fixed to the wall. Even while bearing the weight of the poly-sheeting and duct tape, but removes cleanly for up to 21 days.

· Shurtape PC 608: Heavy-duty, poly-hanging duct tape designed to hold a variety of types and thicknesses of poly-sheeting. It tears cleanly and easily, performs well in cold temperatures, and will stick even in wet, damp, or humid conditions.

For the One-Step Method, try:

· Shurtape DS 154: Double-sided, two-tapes-in-one solution engineered with a differential adhesive system. On the surface side is a painter’s tape that offers 21-day clean removal from a variety of surfaces; on the linered side is an aggressive adhesive that securely holds poly-sheeting and other protective coverings. When the job is done, the tape and poly-sheeting removal cleanly and easily, in a single step.

To learn more and to find the right tape for your next project, visit Shurtape.com.

After the Flood: Product Selection Can Help More People