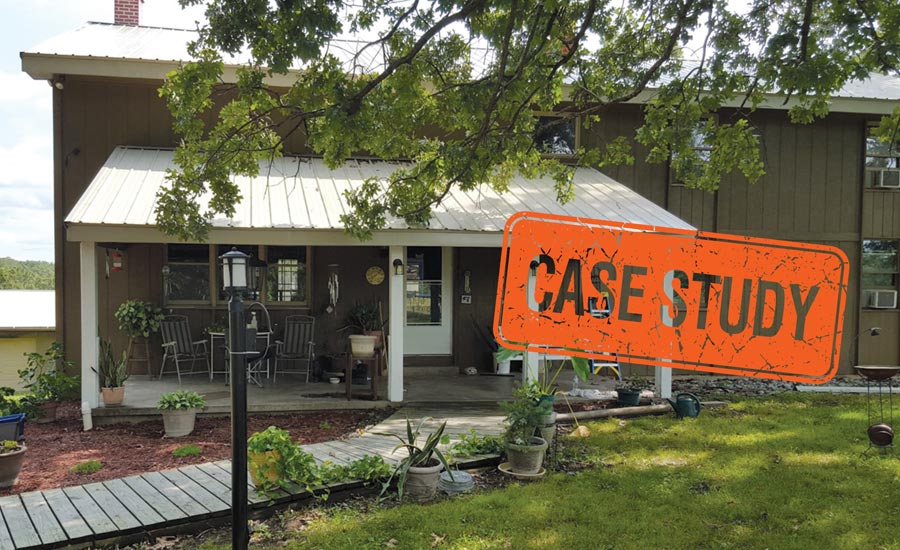 Let me set the scene for you. The home in this case study is nestled atop 35 acres of gentle, rolling hills in mid-Missouri. It was built of native cut lumber, harvested from the property, which had not sealed. In addition, the insured had some health problems and on oxygen. Each of these factors created unique restoration conditions and needs after an electrical fire in the basement last August.

The insureds very concerned about getting 100 percent of the smoke odor removed while preserving the beautiful wood in their home.

Here is the perspective of the adjuster on this claim. Then, we will tackle the restorer’s perspective.

IN THE WORDS OF THE ADJUSTER…

The basement, where the fire started, was heavily damaged. It was gutted, soda blasted, and rebuilt. The main and upper levels of the dwelling had only smoke damage. All electrical, plumbing, and HVAC were replaced with new.

The following day, we met at the property and along with the insured and inspected all the visible damage. Ivan suggested he would have to test several areas of the risk prior to writing his repair plan. The insured was agreeable to the testing. Next, I called the office manager and got her approval to proceed with the testing.

There was considerable risk in getting the wood too wet and causing irregular staining or worse yet, a mold problem. If the wood dried too quickly the wood could have split or cracked. All of the dust, dirt, and smoke had to remove from all the existing cracks, nooks, and imperfections in the wood.

All the tests successful, and the decision made to proceed with cleaning the house using air washing, wet chemical cleaning, and encapsulation. The cleaning of the house and restoration of the fire damage took less than four months. And was approximately $45,000 less than what I had originally quoted the office manager. When I had first inspected the fire and smoke damage. The insured and his wife pleased with the complete restoration of the home and the removal of the entire smoke odor.

IN THE WORDS OF THE AUTHOR & RESTORER:

Fire damage to a property, along with the obnoxious smoke residual particles and associated odor. In and of itself brings a multitude of potential complications that are often times unseen until well into the process of restoration. Not to mention the dynamics involved in dealing with emotionally charged insureds. Who in the flash of a moment had their lives forever altered. While catchphrases like Servpro’s® “Like It Never Even Happened®” are a brilliant play on words, the undeniable truth is that property owners afflicted by fire damage will never forget such a life-changing event.

During the initial inspection, Norm asked if I thought all of the very seasoned and unfinished wood from ceiling to floor could be washed with a brew of specialized chemicals and water. At this point, with a furrowed brow I’m still listening. But thinking to myself – okay, I’ll be your huckleberry and hear you out. He went into further detail suggesting that perhaps building a catch basin to catch the water and chemical mix. Then pumping the waste outdoors and controlling the elevated humidity through the use of dehumidification and air movement could be employed. For a fleeting moment I believed that for a lack of a better word, Norm had gone absolutely crazy. But then, I reminded of a quote from the great Greek Philosopher Aristotle – “No great mind has ever existed without a touch of madness” – And so with that, the game was on!

This case study commenced with three days of exploration and aggressive testing with the intent of locating any and all areas of hidden smoke residue. The ceiling peak in the colossal great room was 26 feet in height, requiring the use of scaffolding. To assume that smoke residual particles had found their way to the backside of the exterior walls. And insulation would have been mere conjecture in the absence of testing. Therefore, several of the planks on the wall’s interior and exterior in each of the rooms gingerly dismantled for the purpose of testing for residual soot using dry sponges and wet towels.

The main level and upper level of the property had very little sheetrock. Even so, we removed some in each of the areas to determine if any smoke particles had migrated into the wall cavities. High compressed air applied to all surfaces to dislodge dust and smoke residue particles. An air scrubber placed to capture as much of the fugitive particles as possible during the washing.

After air washing the structure, we began the process of chemically cleaning all surfaces, vertical and horizontal. Using a power sprayer to emulsify the smoke residue and capture the waste in the catch basin.

Following the wet cleaning of all surfaces, we began the process of applying a wood encapsulation product directly to the surfaces. This process repeated for a second time seven days after the first encapsulation.

The hardwood floors throughout the main and upper levels hand cleaned and sealed with two coats of polyurethane.

By the time we have gone, evidence of the fire was history.

For any complex insurance restoration project to come to a successful close. The stars have to aligned and for alignment, the following dynamics must be in place: