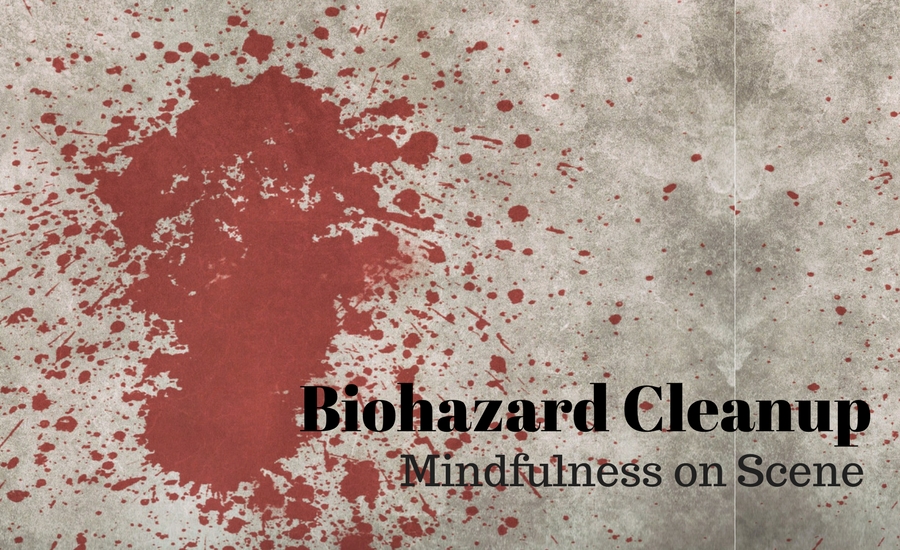 .Article was written by Benny Lichtenwalner

In the residential restoration business, water, fire, mold, and smoke remediation make up the majority of work for a typical firm. Many companies supplement their regular workload with the occasional biohazard cleanup job by leveraging their existing relationships with adjusters and agents. This works out nicely because the scope of work and requisite equipment is very similar between biohazard cleanup and the more common disaster restoration job. Many biohazard cleanup companies work the same way in reverse: that is, primarily cleaning up crime. And trauma scenes and taking the occasional mold job (if qualified). In this way, both types of restoration companies have a lot to offer each other. (This article is written from the perspective of a crime scene cleaner).

In the grind of getting after it, it is easy to move between sites. And stay within the mental frame of a restoration valet without stepping into the shoes of the customer. We (likely) use the same truck, logo, some of the same gear, the same hustle, and retain the same perspective from one job to the next. This makes it all too easy to go from working for Bob and Cindy whose basement just flooded. (But whose family is still intact) to working with Ted and Jill whose precious daughter just took her own life in the basement. This changes the game entirely. Now we aren’t just performing the structural restoration, we’re performing the restoration of the family and psychological restoration.

The first thing that I think of when it comes to empathizing with the customer after a homicide, suicide (or even a natural death) is customer privacy. It’s not an uncommon scenario to move waste and tools to and from the truck and Jobsite. If you’re not parked directly in front of the garage door or somewhere. That minimizes the route from the truck to the work area. The neighbors are going to see you moving biohazard boxes or wearing some level of PPE. In many cases, they will come over and try to initiate a conversation. If they’re approaching you, they’re bound to approach the family at the first opportunity. This is why biohazard cleanup firms use unmarked vehicles. Privacy is a huge concern with this type of sensitive work – respect it by maintaining as low of a profile as possible.

Part of being mindful of the scenario is understanding the psychological ramifications of missing even a needle-tip size spot of blood or body fluid. It’s not even a matter of leaving the scene “contaminated”. Rather, it’s a matter of leaving behind a reminder of the traumatic incident and reopening the wound for the people involved. There are a few ways that biohazard cleanup companies avoid this problem. First, we use work lamps and ladders during the inspection process and move top-to-bottom, left-to-right. And literally, get about a foot off the walls to check for spots (i.e. after a gun blast).  Over time, you become keenly aware of what is blood, say, versus crayon or dirt on the wall.

Second, we take into account the concepts of gravity and time when we perform our remediation. Understanding what gravity and time will do to body fluids across surface layers in the home will impact the depth of your extraction efforts. Let’s take an example of an elderly person passing away by themselves. On their bed on the second floor of the home. Gravity is always at play, but depending on the length of time. That the body left unattended, the resulting contaminants could extend all the way to the basement.

That means that the blood and body fluids went through the bedding, the mattress, the box spring, the upstairs carpet, padding, subfloor, support beams. And then dripped down to the ground floor personal effects, the ground floor carpet/padding/subfloor/beams, and ended up in the basement. It is crucial to check all the way through not only to avoid odor and contamination problems. But to safeguard the family from further exposure to psychological trauma.

Last, if you don’t already use it, consider adding hydrogen peroxide to your chemical locker. When you’re dealing with dark surfaces like desks, bed-posts, or wood flooring, spraying hydrogen peroxide on suspected areas of contamination will reveal areas. That need your attention as the substance will foam up white when it interacts with blood.

Spraying hydrogen peroxide on wooden floor seams is also crucial when it comes to figuring out. Whether or not it makes sense to pull up planks. (When it is likely that if you pull them up, the entire floor will have to be replaced).  If the seams foam up white, the planks need to come up. Remember that surface-level contamination is no indication of how much fluid is in the layers beneath. A spot could be quarter-size on the top of the carpet and basketball size or bigger in the padding or subfloor below. A peroxide is a great tool for protecting the psychological well-being of your customers.